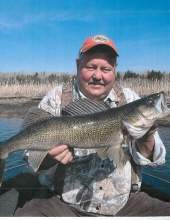 Gaylord H. Wooge, 66, of Forest City, died Tuesday, January 9, 2018 at his home surrounded by his family, under the care of Hospice after a courageous battle with cancer.

Memorial services will be held at 11:00 A.M., Wednesday, January 17, 2018 at the Immanuel Lutheran Church with the Pastor Rod Hopp officiating.

A Celebration of Life gathering will also be held at 6:00 P.M. on Wednesday at Gaylord’s Farm/Walking Eagle Marsh, 1970 340th St. Forest City, IA 50436, the family invites all to join them for food, drink and fellowship.

The family requests that in lieu of flowers, memorial may be directed to the Pheasant Forever No Child Left Indoors and the Hynes Spur Trail, two things that meant a lot to Gaylord.

Gaylord was born May 16, 1951 to Galen and Helen (Steffensen) Wooge. He was the oldest of five children growing up working long hours on the family farm. Gaylord told us many times how he was working in the fields by age 5 driving a Fordson tractor.

Gaylord loved the sport of football and ran track in high school as well, was a member of the FFA, fine arts and graduated from Forest City in 1969.

After high school, Gaylord attended Waldorf College (University) but left after a year and half to work at Forrester Trailer and to farm with his dad. He later returned to finish and received his AA degree in 1973. He loved to tell people that it took him four years to finish a two year school.

Gaylord met his wife, Jody Klinge at a Waldorf basketball game. He caught her eye with just a smile, a wink, and his 1969 Shelby. They were married July 1, 1972 and celebrated 45 years together.

He joined Farm Bureau Insurance in June 1973 as a career underwriter in Winnebago County. He became agency manager of Worth County in Northwood in 1975. In March of 1978 he purchased three small agencies and formed Farm & City Insurance Services in Thompson and later Forest City and Lake Mills.

In 1981, he was pitching a payroll deduction program at Winnebago when he was approached to put together an insurance program for the WIT members. He did not realize that day what kind of an impact WIT members would make on his insurance business down the road. His small staff started calling companies to see if they would be interested in underwriting a program for motorhomes. Gaylord came up with the idea that has now become the industry standard, known as the “Wooge” or “WIT” endorsement coverage. This plan quickly gained wide acceptance not only among Winnebago owners but owners of other makes of RV’s.

Gaylord enjoyed watching the Minnesota Vikings, fishing and hunting all over the North American continent and conversing with the boys at the local watering holes. With his business doing well, he returned to his roots of farming. Over the course of many years, Gaylord was able to purchase farm ground east of Forest City and turn it back into its natural state calling it the “Walking Eagle Marsh”. Hosting the annual “Pumpkin Patch” and Pheasants Forever No Child Left Indoors. Gaylord developed lasting relationships with those in his community and beyond. His reputation preceded him in all that he did and he was the subject of many of the best stories told around the United States, Canada and Mexico.

Gaylord had many health issues through the years but always seemed to battle back. The consensus among the locals was that he had used all his lives up. In August 2011, he was diagnosed with colon cancer. He forged ahead once again with several rounds of chemo. Sick and weak he never complained. Always had a smile and great attitude about life ahead. In late November, his health was deteriorating and admitted into the hospital. With the help of hospice care and some of his special angels, as he called them. Gaylord was able to return home once again. With peace in his heart, he passed away January 9, 2018. At the age of 66.

He was preceded in death by his father, Galen; father-in-law, Clifford Klinge and sister-in-law, Lisa Burt

Dear Gaylord, you will be missed by so many.
To send flowers to the family in memory of Gaylord H. Wooge, please visit our flower store.