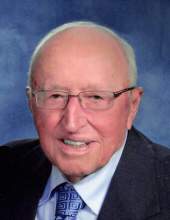 Visitation will be held from 4 to 7 P.M., Tuesday, January 21st at St. Boniface Catholic Church in Garner with a Scriptural wake service at 3:30 P.M. followed by a Catholic Workman rosary. Visitation will continue one hour prior to services at the church

Memorials may be directed to the George Tlach Memorial Fund.

George Charles Tlach, the son of James and Mary (Wellik) Tlach, was born January 28, 1923 on the family farm north of Duncan. He attended the rural schools of Garfield Township until the eighth grade and then helped his father and Uncle Charlie on the farm. On November 18, 1947 he married Betty Hejlik at St. Wenceslaus Catholic Church in Duncan. They lived on the family farm where they raised their eight children. George was a lifelong farmer helping out up until this past fall. In 1990, George and Betty retired and moved into Garner. In 1992, the farm was honored as a Century Farm. He loved music and learned to play the concertina at the age of 70. The three things he treasured the most in his life were his family, farming and dancing with his wife, Betty.

He was a member of St. Boniface Catholic Church, Catholic Workman FCSLA w51 and Farm Bureau.

He was preceded in death by his parents; son-in-law, Robert Murphy; and sister, Emily (Leonard) Rayhons.
To send flowers to the family in memory of George C. Tlach, please visit our flower store.