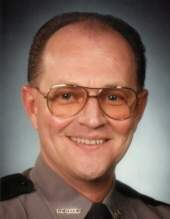 Funeral services will be held 10 A.M., Saturday, August 2nd at the United Methodist Church in Britt with Rev. Robert Dodge officiating. Cremation will follow the service with inurnment at a later date in Evergreen Cemetery in Britt.

In lieu of flowers, memorials may be directed to George Boekelman Memorial Fund.

George James Boekelman, the son of Heyo and Jennie (Meyer) Boekelman, was born January 2, 1944, in Algona. He attended school at Titonka and graduated from Britt High School in 1961. On October 23, 1965, he married Doris Schaefer at First Lutheran Church in Britt. They farmed northwest of Britt until moving into town in 1983. George worked for the Hancock County Reserve for three years and then was hired as a deputy sheriff. He worked as a deputy for 23 years, retiring in 1998. George was proud to be a part of the sheriff's department and was instrumental in helping solve many cases over the years. He enjoyed his family, watching TV westerns, collecting guns and pulling pranks on people.

He was preceded in death by his parents.

To order memorial trees or send flowers to the family in memory of George J. Boekelman, please visit our flower store.