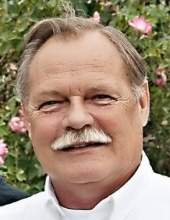 Funeral services will be held 10:30 A.M., Thursday, September 25th at the Cataldo Funeral Home in Britt with Rev. Stan Johnson and Ray Christensen officiating. Cremation will follow the services. Graveside military rites will be held 10 A.M., Saturday at the Belmond Cemetery by the Klemme Veterans Ceremonial Unit.

Visitation will be held from 5 to 7 P.M., Wednesday at the Cataldo Funeral Home in Britt and will continue one hour prior to services at the funeral home.

It is with deep and heavy sadness that we announce the death of George Robert “Bob” Christensen. He passed on September 20th at the Hancock County Memorial Hospital HCMH Hospice Acute Care Unit. Bob, the son of George Melvin and Mable Viola (Reed) Christensen, was born January 5, 1950 in Belmond. Bob attended country school in Liberty Township in Hancock County and graduated from Klemme High School in 1968. He continued his education at Hamilton Business College in Mason City and a V.A. program through NIACC. On May 24, 1970 he married his high school sweetheart, Carolyn Jernegan, at the United Methodist Church in Klemme. Bob served his country in the U.S Army from 1970 until his honorable discharge in 1973. Bob and Carolyn lived in Virginia, Georgia and Germany during his military service. In April of 1973, they moved to the Christensen family farm west of Klemme where they raised their family and Bob farmed. Bob also worked at Duncan Farm Service, Maxyield in Britt and the ASCS office in Garner. He enjoyed his grandchildren, playing cards and NASCAR racing.

He was a member and past commander of the Adam Schaefer American Legion Post 625 in Klemme. He was honored to serve his country and proud to represent his fellow veterans. He was a member and past president of the Klemme Community School Board. Bob was passionate about the education of children. Bob also taught Sunday school at the Klemme Methodist Church while his children were young. Bob was very active in the lives of his children and grandchildren attending football, baseball and many other sports and family events. Bob and Carolyn hosted many family gatherings on the farm where grandchildren loved to spend time. Bob leaves his family with them knowing he was the strongest and bravest man they will ever know.

He was preceded in death by his parents; a sister, Shirley; two brothers, Lloyd and Richard; father and mother-in-law; Robert and Joyce Jernegan of Klemme; and two brothers-in-law, Kenneth Jernegan and Larry Ridley.
To order memorial trees or send flowers to the family in memory of George R. "Bob" Christensen, please visit our flower store.