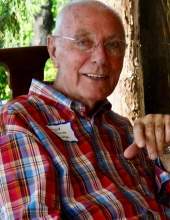 Gerald E. Boman, 82, passed away June 20, 2018 in Palm City, Florida, where he and his wife Mary Jo Boman maintained a residence for nearly 30 years. Although they lived in Florida, they always considered Forest City, Iowa to be home.

While in high school at age 17, Mr. Boman purchased his own farm, south and west of the home place. On November 23, 1955 Boman married high school sweetheart Mary Jo Hanson and the couple began their life together, actively farming from 1952 until 1959.

In the summer of 1959, Mr. Boman joined his father-in-law, John K Hanson in starting Winnebago Industries. It was the beginning of an adventurous 45 year career in which he was a key player in the company’s formation and success. He began in production, becoming Production Manager in 1960, Vice-President of Manufacturing and Board of Directors in 1962, and then in 1975 became Chairman of the Executive Committee, Chief Executive Officer and Chairman of the Board of Directors. In 1977, Mr. Boman became Senior Vice-President and remained an active member of the Board of Directors until retiring in 2010.

Mr. Boman and Chuck Fenn co-founded the Winnebago International Travelers Club (now Winnebago Itasca Travelers Club) in the early 1970’s. His motorhome has always been parked at the top of the River Oaks Amphitheatre for each Grand National Rally- a visual welcome to all.

One of Mr. Boman’s greatest joys in life was flying. He earned his private pilot license at the age of 16 and functioned as the first corporate pilot for Winnebago Industries. Mr. Boman served as Chairman of the Forest City Airport Commission and was a life-long member of the North Iowa Flying Club.

Among Mr. Boman’s life leadership roles were the Iowa Manufacturer’s Association Board (Chairman and Board member), Bethel University Board of Regents (St Paul, MN) Southern Baptist Annuity Board and was a deacon, Sunday School teacher and trustee in his home church of First Baptist in Forest City, Iowa. He loved singing- and did so throughout his life. Among his choral memberships: First Baptist Church, Forest City, Waldorf College Choir, Forest City Community Choir and the choirs of Palm City Presbyterian Church and First Baptist Church, Stuart.

Mr. Boman’s love of God and others led him to embrace many ministries throughout his life-time, in Mexico, Fiji, Burkina Faso, Cuba and the US (to name a few). His partnership with Compassion International, Gideons International and Pine Lake Christian Camp (Eldora, Iowa) were a key ministry focus most recently. In partnership with his wife, he was a staunch supporter of his local Alma mater, Waldorf University, and the couple was awarded Waldorf’s C.S. Salveson Award in 2015 “for exceptional leadership and performance that has resulted in important and significant contributions to the mission of Waldorf University.”

Mr. Boman was a sincere student of the Bible and regular Bible study groups were fixtures in his life. Among his many other activities were sport fishing on his boat, “Triple Threat,” antique tractor rides with the Heritage Park tractor group, the Forest City Thursday night dinner club, recreational motorcycle rides and extended motorcycle rides along the west coast and to Alaska, travel globally (to include Antarctica) and spending time with his family near Denver, Colorado and Seattle, Washington.