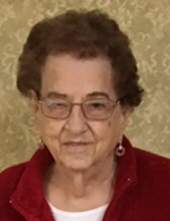 Memorials may be directed to Hancock County Relay for Life in her memory.

Geraldine Doris Hart, the daughter of Andrew and Alice (Hanson) Chodur, was born November 15, 1933, in Mason City. She grew up on a farm near Kensett and attended high school. On January 3, 1950, she was married to Edward Duregger Jr. They lived in Clear Lake where they raised their family. In 1961, she was married to Dale Petersen. Geraldine and Dale managed the Chickasaw County Home and the Hancock County Home for a number of years before moving to Arizona. After Dale passed away, she was married to Bill Hart in Arizona on May 6, 2008. They remained in Arizona until moving to Michigan. In 2016, they moved to Mason City to be closer to family. She enjoyed trips to Diamond Jo Casino and collecting dolls.


To send flowers to the family in memory of Geraldine D. Chodur Duregger Petersen Hart, please visit our flower store.