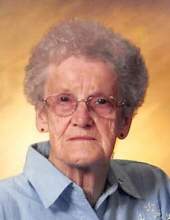 Funeral services will be held 10:30 A.M., Wednesday, December 28th at the United Methodist Church in Garner with Pastor Debra Devine officiating. Burial will be in Evergreen Cemetery in Britt.

Gertrude Annie Paulson, the daughter of Ben and Abbie (Hiller) Lamfers, was born July 11, 1921 in Clarion. She attended country school in Amsterdam Township, Hancock County and graduated from Kanawha High School in 1940. On February 15, 1941, she was married to Paul Paulson at the United Methodist Church in Britt. They lived on Paul’s parent’s farm southwest of Britt for eighteen years. In March of 1959, they moved to an acreage northwest of Garner. Gertie was employed at Engstler Potatoes in the fall, Farmers Produce in Garner from 1960 to 1968 and Winnebago Industries for forty years until her retirement in 2008. Gertie enjoyed working around her acreage, raising sheep and gardening.

She was a member of the United Methodist Church in Garner and UMW.

She was preceded in death by her parents; husband, Paul, in 1987; daughter, Maxine; three grandchildren; five brothers; and nine sisters.
To send flowers to the family in memory of Gertrude "Gertie" A. Paulson, please visit our flower store.