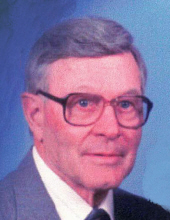 A funeral mass will be held 3:00 p.m., Friday, November 19, 2021 at St. Boniface Catholic Church in Garner with Rev. Fr. Andrew Marr officiating.  Burial will be at St. Boniface Cemetery with military rites by the Garner Veterans Ceremonial Unit.

Memorials may be directed to Hancock County Relay for Life or the American Heart Association. Glenn Leo Wille, the son of Cornelius and Marie (Thiemann) Wille, was born April 4, 1926 in Klemme.  He attended country school and graduated from Klemme High School in 1944.  On July 18, 1950 he married Anna Lou DeWeerdt at St. Boniface Catholic Church in Garner.  Glenn served his country in the U.S. Army from February 13, 1951 to February 6, 1953 as a radio operator during the Korean Conflict.  Upon his honorable discharge he returned home to his wife, Ann Lou and daughter, Debra.  They made their home in Mason City for a year and then moved to the Wille family farm southwest of Ventura where they raised their family and farmed.  Besides farming, Glenn also sold Crow’s Seed Corn and served as a census taker for many years.  He enjoyed playing cards, attending social events, reading and woodworking.

He was a member of St. Boniface Catholic Church and served on many county and community boards over the years.  He was active in the Hancock County Relay for Life and  4-H. Glenn and Anna Lou hosted many foreign students in their home through an ag exchange program.

He was preceded in death by his parents; wife, Anna Lou, March 1, 2017; sisters, Norma Rockow, Ada Rockow and Ruby Blanchet; and brothers, Aaron and Ray Wille.
To order memorial trees or send flowers to the family in memory of Glenn L. Wille, please visit our flower store.
Send a Sympathy Card