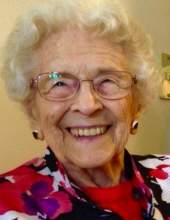 Funeral services will be held 10 A.M., Wednesday, May 9, 2018 at Immanuel Reformed United Church of Christ in Klemme with Rev. Diane Friedericks officiating. Burial will be at Ell Township Cemetery in Klemme.

Visitation will be held from 5 to 7 P.M., Tuesday at the Cataldo Funeral Chapel, 160 E. 4th St., in Garner will resume one hour prior to services at the church.

Gracka H. Gerardi made music in many ways for all of us who knew her and were touched by her long and generous life. She was born in Belmond, Iowa on July 12, 1914, to Conrad and Grace (Blank) Quandt. She attended elementary school in Belmond and graduated from Klemme High School in 1932. Gracka was one of the oldest alumni of the University of Iowa, graduating in 1936 with a bachelor’s degree in Music Education, with a focus on piano. Gracka was a teacher her entire life and began her first teaching positon in Keystone, Iowa where she taught English, Biology and Music. During this time, she met the love of her life, Ernest A. Gerardi and they were married in 1938. Gracka and Ernie lived in Wichita, Kansas during the war years where Ernie worked for Boeing Aircraft and the Helzberg’s Jewelers. In 1949 Gracka and Ernie moved to Klemme where they owned and operated Gerardi’s Café as well as giving piano and accordion lessons to hundreds of North Iowa young people over the years. Ernie and Gracka will be remembered by their recitals and accordion bands. Gracka was the organist and choir director at Immanuel Reformed United Church of Christ for many years and taught K-12 music for the Klemme Schools from 1965 – 1979. Gracka moved to Cardinal Grove Apartments in Garner, when she was 91, where she has received loving care for the past twelve years and where she cared for Midnight, her beloved cat.

Gracka was preceded in death by her husband, Ernie; her parents, Conrad and Grace Quandt; her son-in-law, Lee Gruis; and her adopted great granddaughter, Carly Collard-Cotonne.
To order memorial trees or send flowers to the family in memory of Gracka H. Gerardi, please visit our flower store.