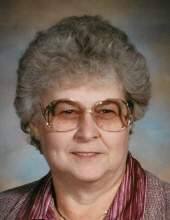 Grayce was born in Doon, Iowa on November 26, 1926, the daughter of Ralph and Marie (Lems) Zwaan. She grew up in Doon and graduated from the Christian School there. She played basketball during High School and was known as the “rough and tumble” Grayce.

After high school she attended Westmar College in Lemars, Iowa and became a teacher. She taught at a country school in Sioux county for a year and a half. Grayce took a few years off of teaching and got married to Cornie Kooiman and stayed home to raise their children together in Rock Valley, Iowa. They later divorced. In 1958 Grayce and her family moved to Forest City and she went back to college. She returned to teaching in 1967 and taught in the Forest City school system for 27 years. After retiring Grayce spent a few years traveling and she spent lots of time with her grandchildren and great-grandchildren. She will be dearly missed by all who knew and loved her.

She was preceded in death by her parents; brother, Leonard; sister, Henrietta and infant son, Daniel Marshall Kooiman.
To send flowers to the family in memory of Grayce Marie Kooiman, please visit our flower store.