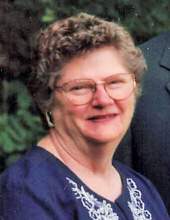 Gwendolyn Faye Pearson, the daughter of Albert G. and Margaret A. (Carothers) Lade, was born October 21, 1931 on the family farm northeast of Garner.  She attended country school and Garner High School.  She met her husband, Eldon, while attending a movie at the Avery Theatre in Garner where Gwen worked as an usher.  They married on August 27, 1948 at the Little Brown Church in Nashua and were married for 72 years. They farmed near Mason City for two years and then returned to her family farm northeast of Garner where they continued to farm and raised their family.  Gwen was an essential partner in their farming business.  She was capable of driving a combine when needed yet willing to provide meals for a table full of friends and neighbors when they came to help fill silo and shell corn. She spent hours cooking meals, baking and canning tomatoes from her garden.  Gwen made seven varieties of delicious pickles from her garden cucumbers.  Lucky was the person who received a gift of a jar of those pickles! In 1989 Gwen and Eldon moved into Garner allowing the next generation of family to move onto the farm and develop the same love of the land that they had enjoyed.   Gwen was a member of the United Presbyterian Church, UPW and “From the Heart” sewing group that made baby blankets and stuffed animals to comfort children.  She taught the 3-4 year old Sunday school class for many years and co-taught the 7th- 8th grade Sunday school class with Eldon. She was also involved with a weekly church Youth Club where kids gathered after school to learn a new craft, have bible study and supper together. Gwen’s faith sustained her throughout her life.  Her faith always reflected in her actions with others.  She had a listening ear and a kind word toward everyone.  Gwen served as a Scout leader when her 3 daughters participated in the Brownie and Girl Scout troops. She also was an important support to the Concord Chix 4-H Club hosting all day meetings.  She worked closely with the County Extension Office in connection with Hancock County 4-H fair demonstrations. Planning a week long family vacation car trip was a yearly event.  Early in the year Gwen would plot a travel route to various U.S locations. She would write to the Chamber of Commerce in cities on the map and wait for the mailings to arrive to choose which stops would be made along the way.  She packed the trunk with Folgers coffee tins filled with her homemade cookies, one for each day of the trip. A favorite memory of her daughters was the creative way Gwen made house work fun.  On Saturday mornings she filled a job jar with slips of paper listing a household task.  The jar was passed around until empty. Without a word we knew Mom’s expectations for Saturday cleaning. Gwen enjoyed sewing. She made clothing not just for her daughters as they grew but bridesmaid dresses for their weddings. For Christmas there were often hand sewn pajamas for each grandchild. She made a baby blanket for every grandchild and great grandchild. She also enjoyed embroidering tablecloths and pillow cases...making many treasured gifts.

She was preceded in death by her parents; husband, Eldon, April 20, 2021; a sister-in-law, Astred (Harold) Schwab; a brother-in-law, Arnie (Mary) Pearson; and a nephew, Bill Pearson.
To order memorial trees or send flowers to the family in memory of Gwendolyn F. Pearson, please visit our flower store.