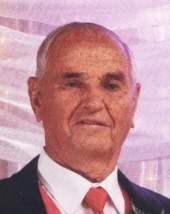 GARNER - Harlan E. Carolus, 82, of Garner died Monday, October 14th at the Hancock County Memorial Hospital in Britt with his family by his side after a long and courageous twenty-three year battle with cancer.

Funeral services will be held 10:30 A.M., Saturday, October 19th at the United Presbyterian Church in Garner with Rev. Justin Asche officiating. Burial will be in Concord Township Cemetery in Garner with military rites by the Garner Veterans Ceremonial Unit.

Visitation will be held from 4 to 7 P.M., Friday at the United Presbyterian Church and will continue one hour prior to services at the church on Saturday. Cataldo Funeral Home is in charge of arrangements.

Memorials may be directed to the United Presbyterian Church or Hospice of North Iowa.

Harlan E. Carolus, the son of Albert and Elsie (Rust) Carolus, was born on the home farm south of Klemme on October 19, 1930. He lived on the same farm for seventy-five years except for the time spent in the service during the Korean conflict. He was married to Betty Griffen on January 22, 1952 at the United Presbyterian Church in Garner. They worked together on the farm and raised four children. In 2005, he moved to Garner but still enjoyed helping on the farm and also raised a big garden; he loved sharing the produce with everyone. Harlan loved his family dearly and looked forward to the times he could spend with his children and grandchildren. He did not know a stranger and loved to visit with everyone.

He was preceded in death by his daughter, Kathleen Oxley and her husband Mike; parents, Albert and Elsie Carolus; brother, LeRoy Carolus and his wife, Josephine Carolus; brothers-in-law, Morris Nuehring and Fred and Leon Griffen; and sisters-in-law, Jeanne Schroeder and Edna Mae Griffen.

To order memorial trees or send flowers to the family in memory of Harlan Eugene Carolus, please visit our flower store.