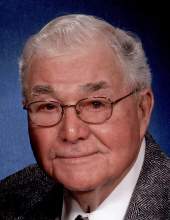 Funeral services will be held 1:30 P.M., Friday, October 12th at the United Methodist Church in Britt with Rev. Robert Dodge officiating. Burial will be at Evergreen Cemetery with military rites by the Britt Veterans Ceremonial Unit.

Visitation will be held from 5 to 7 P.M., Thursday at the Cataldo Funeral Home in Britt and will resume one hour prior to services at the church.

Harry Eugene Smith, the son of LeRoy and Martha (Moe) Smith, was born July 21, 1929 in Britt. He grew up on a farm near Britt and attended Britt High School. On February 4, 1951 he married Pearl Nagel at Central Lutheran Church in Mason City. In December of 1951, Harry enlisted in the US Marine Corps. He was stationed at Camp Pendleton, CA and served as a Camp Drill Instructor in San Diego. Following his honorable discharge in 1953, he returned to Britt with Pearl and farmed southwest of town for 40 years. In 1992, Harry and Pearl built a new home in Britt and moved into it in the spring of 1992. During his retirement, Harry worked as a school bus driver for West Hancock Schools, delivered Winnebago’s and worked part-time at Pritchard Auto and Smidley Manufacturing in Britt. He also helped at the Hancock County Ag Museum, restored an old tractor and volunteered and delivered Meals on Wheels in the community. He was proud to be a regular blood donor. Harry enjoyed refinishing furniture, reading, gardening, fishing, doing volunteer work and helping friends.

He was preceded in death by his parents; brothers, James Smith and Jerry (Jenny) Smith; and nephew, Jim Smith, Jr.
To send flowers to the family in memory of Harry E. Smith, please visit our flower store.