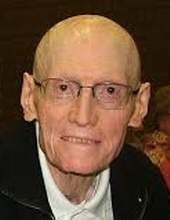 Celebration of Life Services will be held at 10:30 A.M. Thursday, July 23, 2015 at Immanuel Lutheran Church in Forest City with Pastor Rod Hopp officiating.

Inurnment of cremains will be held in Oakland Cemetery in Forest City.

Memorials may be directed to Gideons International or Immanuel Lutheran Church.

Harvey Glen Aaron Johnson was born July 29, 1931 in Renville County, North Dakota to Nels and Helen Johnson. He graduated from Tolley High School in 1949, Concordia College in 1953, and went on to earn Master degrees from Mankato State University in 1957 and Oregon State University in 1968.

From 1952 – 1962, Harvey taught and coached in four Minnesota high schools: Hitterdal, Pemberton, Freeborn and Staples, and also served in the U.S. Army Reserve. In 1959, he married Barbara Joy Braseth from Mahnomen, Minnesota, and they had three children: Julie, Jennifer and Eric.

The family moved to Forest City, Iowa, where Harvey taught science and coached basketball and golf at Waldorf College from 1963 – 1982. He continued his career in radon testing and mitigation and retired in 1994.

Harvey’s faith in God became a driving force in his life. As a member of Gideons International, he served on the State Cabinet, and loved sharing his faith nearly every place he went.

He played and practiced golf with a passion. His best golf memory included Eric when they paired up to win the Echo Valley Country Club Pines Champion Golf Tournament in 2008. He loved traveling with Barb and meeting new people. He was always coming up with clever inventions, and it seemed that there was nothing that he could not fix or improve. As a young man he learned to work hard against the odds, and continued with that same determination to overcome right to the end of his life.

Harvey loved his family. He was loyal, devoted, and so grateful for Barb. He was proud of his three children and their accomplishments and families. He had a special song for each of his three granddaughters, Isabel, Katie, and Elsie, and each found a special place in his heart.

He is survived by his wife, Barbara Johnson of Forest City; daughters Julie and Jennifer and son Eric; son-in-law Felix Tweraser and daughter-in-law Kristin Johnson; granddaughters Isabel Tweraser and Katie and Elsie Johnson; two sisters Marie (Ron) Frank, Beverly (Keith) Moore, as well as a host of nieces and nephews.