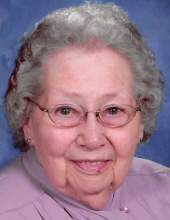 Funeral service will be held at 10:30 A.M., Saturday, February 7, 2015 at the First Lutheran Church in Britt with Rev. Norman Bauer officiating. Burial will be in Evergreen Cemetery.

Visitation will be held from 5 to 7 P.M., Friday at the Cataldo Funeral Home in Britt and will continue one hour prior to services at the church.

Helen Lorane Gremmer, the daughter of Fred and Etta (Bruns) Mayland, was born August 15, 1923 in German Township, Kossuth County. She was baptized on September 19, 1923 and confirmed April 10, 1938 in the Lutheran faith. She attended rural school near her home and worked for her aunts in the Titonka area. During WW II, she worked at Wallburg Cabin Camp in Algona as a cook for German prisoners of war. On December 27, 1945 Helen was united in marriage to Henry Gremmer at First Lutheran Church in Britt. The couple lived and farmed in the Wesley and Woden area. In 1988, they retired from farming and moved into Britt. She enjoyed crocheting, sewing quilts and her grandchildren, great grandchildren and great-great grandchildren. They were her life. She also enjoyed playing cards all the time with family and friends. We are sure she is playing cards with her sisters now.

She was a member of First Lutheran Church in Britt and was a former member of Immanuel Lutheran in Titonka.

She was preceded in death by her parents; daughter, Kathleen Kay in 1955; a son-in-law, Rick Plymesser; great grandson, Skylar Roth; and siblings, Herman, Walbert, William, Jeanette, Ben, Henry “Louie”, Donald, Ernest, Erlene, Marie Ann and Engaline. She will be dearly missed by all of us that love her.
To send flowers to the family in memory of Helen L. Gremmer, please visit our flower store.