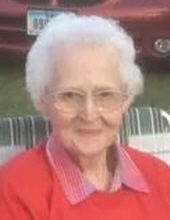 Helen Mae Hauge, 87, of Fertile, died Tuesday, December 23, 2014 at the Good Samaritan Center in Forest City.
A visitation will be held Monday, December 29, 2014 from 4:00 - 7:00 P.M. at the Cataldo Schott Funeral Chapel, 505 North Clark St. Forest City, Iowa. Funeral Services will be held at 10:30 A.M. on Tuesday, December 30, 2014 at the Fertile Lutheran Church with the Pastor Dave Halvorson officiating. Interment will be held in Brush Point Cemetery in rural Fertile. Memorials may be directed to the Fertile Lutheran Church.

Helen Mae Keyser was born in Dickinson County, Iowa on October 6, 1927 to Harold and Pearl (Nelson) Keyser. She was raised in the Spirit Lake area and attended school there until her sophomore year when the family moved to the Quad Cities for employment. She finished her schooling there. Helen met Arnold Hauge in 1945 and they were married at West Prairie church in Leland, IA in January of 1946. To this union five children were born; Dennis Arnold, Paulette Kay, Kent, Paul and Craig.
During their married years they lived and farmed in the Thompson/Leland area from 1946-1954. The following year they moved to Bancroft where Arnold and Helen worked for Welp’s Hatchery. Later they moved to Forest City where Helen worked at Basket Grocery and the Bungalow Café and Arnold was employed with Fryer Farms. In 1966 they purchased acreage near Fertile. Helen then went to work for Johnson’s Pharmacy. Helen later retired from working at the Chuck Wagon Café where she had worked for several years.

Helen was an excellent cook and baker. She took great pride in preparing meals for her family. She loved her family with her whole heart. She very seldom missed an event that her children or grandchildren were in. The best times were spent in her front yard watching the kids play ball on a Sunday afternoon.

Helen is survived by her husband, Arnold of Fertile; sons, Kent (Carmen) Hauge of Forest City and Paul Hauge of Britt; grandsons, Jeremy (Kellie) of Grimes, Ben (Julie) of St. Ansgar, Matt of Mason City and Bryan of St. Paul and great grandchildren, Kinzley and Beckett.

Helen was preceded in death by her parents; sons, Dennis and Craig and daughter, Paulette.

She will be greatly missed by her family and many friends.
To order memorial trees or send flowers to the family in memory of Helen M Hauge, please visit our flower store.
Send a Sympathy Card