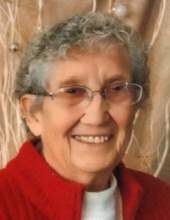 Funeral services will be held 11:00 A.M., Saturday, February 8, 2020 at the United Presbyterian Church in Garner with Rev. Justin Asche officiating. Burial will be at Concord Township Cemetery in Garner.

Visitation will be held one hour prior to services at the church on Saturday. Arrangements are with Cataldo Funeral Home in Garner.

In lieu of flowers, donations may be directed to the Animal Rescue League or the Garner Volunteer Ambulance Service.

Helene A. Maley, the daughter of William and Ida (Frohling) Harbison, was born May 25, 1932 in Eagle Grove. She was raised into a blended family of nine. Helene and four of her siblings were part of an acrobatic act who performed all over the Midwest and even appeared on the Lawrence Welk Show. They called themselves the Harbison Five. Helene was very proud to be a part of the group. She loved to tell the story and show the poster of the Harbison Five to whoever came to visit her. On March 25, 1951 (Easter Sunday) she was married to Dale Maley. They made their home in Garner where they raised three children, Katherine Annette, Julie Ruth and Brian Dale Maley. Her family was all she needed. She used to say, “Without my family I would be just a shell of a person, but my heart is full, and I am blessed.”

She was a life-long member of the United Presbyterian Church.

She was preceded in death by her parents; husband, Dale; daughter, Kathy Murray; son, Brian Maley; and brothers and sisters, Bud, Jesse, Lorene, Enola, Elna “Toots”, Billie, Clare and Buster.
To order memorial trees or send flowers to the family in memory of Helene A. Maley, please visit our flower store.