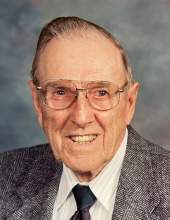 Funeral services will be held 10:30 a.m., Tuesday, November 30, 2021 at First Lutheran Church in Britt with Pastor Anna Wolf officiating. Burial will be at Evergreen Cemetery in Britt with military rites by the Britt Veterans Ceremonial Unit.

Visitation will be from 4 to 6 p.m., Monday, November 29th at Cataldo Funeral Home in Britt and will resume one hour prior to services at the church on Tuesday.

Memorials may be directed to First Lutheran Church Elevator Fund.

Henry Gremmer, the son of Eppo Sr. and Jenny (Pomp) Gremmer, was born November 5, 1919 on a farm north of Wesley.  At the age of 16, the Gibson crime gang car ran out of gas.  They took the Gremmer family hostage and stole the family car! While being engaged to Helen Mayland, Henry was drafted in 1942 into active duty.  He served in the Pacific Invasion in World War II as a truck driver for the infantry.  He was honorable discharged in October of 1945.  On December 27, 1945 he married the love of his life, Helen. The couple lived and farmed in the Wesley and Woden areas.  In 1988, they moved to their home in Britt. Henry enjoyed playing various card games and dominoes.  He also enjoyed going to cards on Tuesdays with his card club.  Henry loved all his grandchildren, great grandchildren and great-great grandchildren.  He was very proud that he continued to live at home at the age of 102.  On Henry’s 100th birthday, he was honored with a celebration with many family and friends.  He cherished making many memories and taking photos.  In 2009, Henry was chosen to be on an Honor Flight out of Mason City.  He enjoyed it very much and was proud to be a veteran.  In 2021, he was honored as the oldest living WW II veteran in Britt and was Grand Marshall of the Hobo Day parade.

He was a member of First Lutheran Church where he served on the church council and folded the bulletins every week until the age of 100.

He will be deeply missed by everyone that loved him.
To send flowers to the family in memory of Henry Gremmer, please visit our flower store.