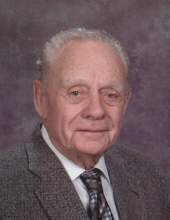 A visitation will be one hour prior to the services on Saturday at the church.

In lieu of flowers, memorials may be directed to the Winnebago Historical Society.

Herb was born on April 4, 1926 in Mt. Valley Township, son of Wilfred and Eleanor (Jones) Peterson. He attended schools in Mt. Valley and Forest City High School. After graduating in 1943, he enlisted in the U.S. Navy and served in the South Pacific until the end of the war. He returned to Forest City and joined his father on the family farm. On January 19, 1947, he married Bonna Otis in Forest City.

After years of working for Standard Oil as a farm agent and customer service manager at Winnebago Industries, he considered his 15 years of driving a school bus for Forest City schools as his favorite job.

Herb was preceded in death by his parents; brother, Roger who died in WWII; his sister, Miriam and brother-in-law, Ed Knudtson.

To send flowers to the family in memory of Herbert G. Peterson, please visit our flower store.