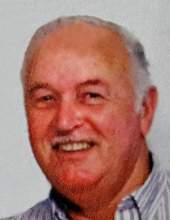 Herbert Raymond Greimann, Jr., the son of Herbert and Esther (Berg) Greimann was born December 21, 1938 in Hancock County. He was confirmed at Immanuel Reformed United Church of Christ in Klemme. Herb was a member of Klemme High School class of 1957. On May 6, 1960 Herbert was united in marriage to Coleen Gifford at the United Methodist Church in Belmond. The couple lived on a farm near Klemme where they raised their three children. Besides farming, Herb also drove truck and was a bridge construction worker. In 1992, Herb and Coleen moved into Belmond. Herb enjoyed being outdoors where he could fish and watch wildlife. He also enjoyed Indian artifacts and loved to tell his hunting stories.

He attended Dayspring Assembly of God Church in Belmond.

He was preceded in death by his parents; and two brothers, Dennis and Lewis Greimann.
To order memorial trees or send flowers to the family in memory of Herbert R. Greimann, please visit our flower store.