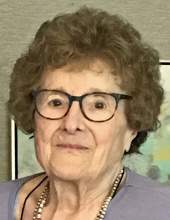 Due to state and federal guidance on gatherings due to the COVID-19 pandemic, the family will not be having a public memorial at this time. A private family graveside service will be held Wednesday, April 1, 2020 at Evergreen Cemetery in Britt with Rev. Robert Dodge officiating. A visitation and memorial service will be held at a later date.

Memorials may be directed to the Britt United Methodist Church, WHAS (West Hancock Ambulance Service) or MercyOne North Iowa Hospice. Cataldo Funeral Home in Britt is in charge of arrangements.

Ivalou Mae Huling, the daughter of Robert and Alta (Grimm) Steven, was born February 13, 1928 in Corwith, Iowa. She graduated from Algona High School in 1945. She worked as a telephone operator during and after high school. She met and married Gene Huling who served our country during WW II and Korea. On January 2, 1948 they were married at the Britt United Methodist Church. Gene and Ivalou made their home on an acreage southwest of Britt where they raised their family and farmed together until their retirement. Ivalou loved attending her grandchildren’s’ and great grandchildren’s’ activities which included football, basketball, hockey, wrestling, soccer, swimming, showing sheep, and lacrosse. Ivalou was an avid West Hancock Eagles fan going to many sports activities over the years. She enjoyed reading, handwork, cooking and baking.

She was a member of the Britt United Methodist Church, UMW, 3 Gs Homemakers Club, Red Hatters, American Legion Auxiliary where she served as president and secretary on local, county and district levels, and HCMH (Hancock County Memorial Hospital) Auxiliary serving as president. She also belonged to the Rebekah Lodge as Noble Grand, volunteered for many years doing blood drives and was a 4-H leader.