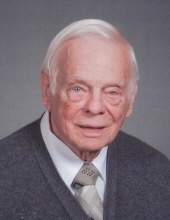 Visitation will be held one hour prior to the services at the church on Saturday
In lieu of flowers, memorials may be directed to Immanuel Lutheran Church or the Winnebago Historical Society.

Jack Arnet Soderling was born on April 21, 1932 in Sioux Falls, South Dakota, the son of Einar and Emma (Englund) Soderling. Jack moved to Forest City was his family at age four. Jack attended and graduated from Forest City High school (Class of 1950). During high school, Jack was a guard on the Forest City High School basketball team that played for the state championship in 1950 when the classes were thrown together and there was only one state champion. FCHS lost to Ottumwa in the championship game.

Jack entered in the United States Army in 1953 and was honorably discharged in 1954 with a rank of SGT. After returning from his service in the military he was accepted to the University of Oregon where he graduated with a B.S in Biology. After completing his undergraduate degree, Jack went on to Dental School at the University of Minnesota where he received his D.D.S in 1960. After graduating from the U of MN, Jack came back to his hometown of Forest City and established his dental practice. Jack married Betty Ann Ruspino on March 10, 1962 in Minneapolis, MN. Together they made a home in Forest City and where Jack was very active member of the community.

Jack was a member of Forest City Rotary. Through his many years as a Rotarian, Jack had been on the board of directors, headed up the club’s tree planting program for several years and earned the nickname of “Colonel Jack” while serving as a foreman on the cooking line for the annual chicken barbecue. Jack was a true believer in the Rotary motto of “Service Above Self.”

Jack was a city councilman, a director of Forest City Development, served on the Municipal Airport Commission since the airport was built in 1972, and was an active member of Immanuel Lutheran Church.

He was preceded in death by his parents and three brothers-Vincent, James, and Donald.
To order memorial trees or send flowers to the family in memory of Jack Arnet Soderling, please visit our flower store.