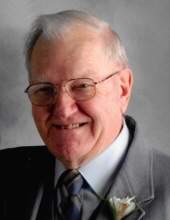 Memorial services will be held 10:30 A.M., Tuesday, September 23rd at the St. John’s Lutheran Church in Woden with Pastors Kim and Trudy Peterson officiating. Inurnment will be in Bingham Township Cemetery near Woden.

Visitation will be held from 5 to 7 P.M., Monday at the Cataldo Funeral Chapel in Woden and will continue one hour prior to services at the church.

James A. Buns, the son of Tony and Verna (Greenfield) Buns, was born November 8, 1927 in Woden. He was baptized and confirmed at St. John’s Lutheran Church in Woden. James attended country school in Bingham Township in Hancock County before graduating from Woden High School in 1945. After graduating, James farmed with his father east of Woden. On July 2, 1947 he was united in marriage to Dixie Gerdes at St. John’s Lutheran Church. In 1972, he retired from farming and the couple moved into Woden. James also worked for Hancock County road department and drove school bus for Woden-Crystal Lake Community Schools. He and Dixie enjoyed their time at the cottage on Big Spirit Lake, fishing, garage sales and having the grandkids spend time with them. James also enjoyed going for coffee at the Woden Coop Elevator and Wubben’s. He loved golfing at Gruis Golf Course where he spent many summer days with his friends and brother, Kenny, on the course.