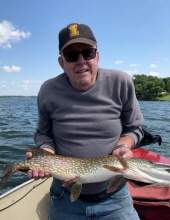 James Douglas French, 80, of Forest City, passed away peacefully with his family by his side, Wednesday, January 15, 2020 at the MercyOne Hospice Inpatient Unit in Mason City.

A gathering of friends and family will be held one hour prior to services at the church on Sunday.

Burial of cremains will be held at a later date.

James Douglas French, Jim, but known too many family and friends as Doug, was born May 22, 1939 in Panora, Iowa the son of John S and Hazel D. (Whistler).

Jim was a husband. Always doing what needed to be done to take care of his wife and make sure they could live a full and rewarding life. Jim was a Father and Grandfather. He loved his kids very much. He had a son and daughter with his first wife and when he married Connie, he took on 4 more daughters! Jim came up with some very interesting parenting strategies to deal with all of the estrogen and Denny. Dr. Spock would have to write another chapter-but it worked pretty darn well. Jim was a planner, enjoyed planning trips for large groups of friends. He was the best support man ever. He was always doing his best to take care of everyone’s needs and make sure they were having a good time-except for the “Hey buddy, I got my own problems” bike tour. Jim was a confidant. He was always willing to give you advice-life, financial, marital or to discuss political opinions. He was always ready to lend a helping hand even though he is the first to admit he wasn’t very handy…

Jim loved to go on fishing trips with “the boys”. Spending many days and weeks with his family and friends out on the boat and fishing up north. He caught some mighty fine fish and could tell a tale or two! He was a teacher, He always wanted to make sure everyone learned how to do things the right way-which was his way-so they were safe…

Loving referred to as “Rainman” for his ability to find the shortest way anywhere in the United States and tell you what time you would be home within 15 minutes time gap. Fishing, Biking, Skiing, hiking and any Sport-especially the Iowa Hawkeyes. Jim had the ability to multitask several games by several different media outlets simultaneously and not hear a word that Connie said… Jim was the master of the remote control even if it wasn’t his own…

He was preceded in death by his parents; sister, Eleanor Fiala; grandson, Mike French, and granddaughter, Lisa White.
To order memorial trees or send flowers to the family in memory of James Douglas French, please visit our flower store.