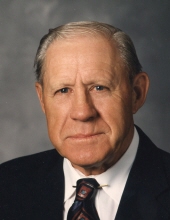 Hanlontown – James H. Petersburg, 96, passed from this heavenly earth into eternity with his savior, Jesus Christ, on Wednesday, December 28, 2016, at the Lake Mills Care Center.

Burial will be in Brush Point Cemetery, rural Fertile.

In lieu of flowers memorials may be made to the Salvation Army, Pilot Knob Lutheran Church or charity of choice.

James, the son of Edwin and Mabel (Suby) Petersburg was born September 6, 1920. On February 17, 1946, he married E. LaVone Brenden. They lived on their family farm north of Fertile, raising four children. After retiring from farming in 1986, James was involved in the fine arts community with woodworking and together he and LaVone participated in fine arts shows throughout the upper Midwest. They were active members of Pilot Knob Lutheran Church. LaVone went home to be with the Lord on April 14, 2010.

James was preceded in death by his parents, Edwin and Mabel Petersburg; two brothers, Donald (and wife, Eunice) Petersburg and Marlin Petersburg; a great-granddaughter, Marta Anderson, and two great-grandsons, Soren Petersburg and Lucas Petersburg.
To order memorial trees or send flowers to the family in memory of James H. Petersburg, please visit our flower store.
Send a Sympathy Card