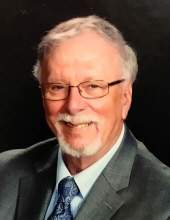 A memorial visitation will be held from 4 to 6 p.m., Friday, December 3, 2021 at Cataldo Funeral Chapel, 160 E. 4th St., in Garner. A flag presentation ceremony will be conducted by the Garner Veterans Ceremonial Unit at 6 p.m.

Memorials may be directed to Lions Club International.

James Gray Arnold, the son of John and Essie (Gray) Arnold, was born June 4, 1940 in Colfax, Louisiana.  He graduated from Dry Prong High School and enlisted in the U.S. Navy. Following his honorable discharge, he returned to Louisiana and began working as a maintenance superintendent for Farmland Industries.  In 1988, he moved to Garner and continued in his position with Farmland Industries until his retirement.  On April 25, 1992 he married Linda Divan Kollasch at the Little Brown Church in Nashua. He enjoyed fishing, hunting and taking photos. He was an active member of the Garner Lions Club.

He was preceded in death by his parents; son, DeWayne Arnold; and two brothers, Howard and Billy Arnold.
To send flowers to the family in memory of James "Jim" Arnold, please visit our flower store.