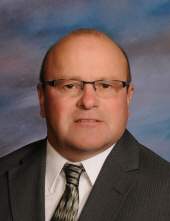 A memorial mass will be held 10:30 A.M., Tuesday, February 16, 2021 at St. Patrick’s Catholic Church, 139 3rd St. S.E., Britt with Rev. Fr. Andrew Marr officiating. The service will be livestreamed on the Cataldo Funeral Home Facebook page. Inurnment will be at Bingham Township Cemetery near Woden.

A memorial visitation will be held from 4 to 7 P.M., Monday at St. Patrick’s Catholic Church in Britt with a Knights of Columbus rosary at 3:30 P.M. and a Scriptural wake service at 7 P.M. Masks are recommended and social distancing guidelines will be followed.

James Paul Wellik, the son of Paul and Arlene (Jakoubek) Wellik, was born February 14, 1957 in Britt. He graduated from Woden-Crystal Lake High School in 1975 and began farming in the Woden area. In Jim's lifetime he raised crops, sheep, pigs, cattle, and chickens. On August 21, 1982 he married Carla Kollasch. They farmed near Woden where they raised their family. In addition to farming, he also spent many summers building grain bins. Jim enjoyed tending to his livestock, attending his kid’s activities, was an avid Iowa State Cyclones fan and enjoyed going to the movies. Teaching the grandkids how to drive the ranger, sharing cookies, ice cream and ice tea was a ritual. One of his many joys in life was spending time with his children and grandchildren. Jim will always be remembered for teaching them the ways of life on the farm.

Jim was a member of St. Patrick’s Catholic Church in Britt and was a Third-Degree Knight of Columbus. He served on the Prairie Energy Cooperative Board, Woden-Crystal Lake School Board and the Hancock County Pork Board.

Jim is survived by his wife, Carla of Woden; three children, Teresa (Waylon) Folkerts and their three children, Leah, Jake and Luke of Grimes, Jared (Sara) Wellik and Baby Wellik of Woden and Mark (Grace) Wellik and their son, Beau of Garner; a sister, Ruth (Leroy) Meyering of Bloomington, MN; two brothers, Roger (Sharla) Wellik of Forest City and John (Susan) Wellik of Dallas, TX; and many aunts, uncles, nieces, nephews and cousins.

He was preceded in death by his parents; and infant daughter, Amanda Wellik.
To order memorial trees or send flowers to the family in memory of James "Jim" P. Wellik, please visit our flower store.