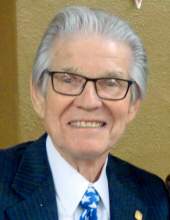 A memorial mass will be held 1:30 P.M., Saturday, September 2nd at St. Boniface Catholic Church in Garner. Inurnment will be in the church cemetery at a later date.

Visitation will be held one hour prior to services at the church on Saturday. Cataldo Funeral Home of Garner is in charge of arrangements.

Jim was born to Clarence and Pauline (Yegge) Reinig on February 16, 1928 in Portsmouth, Iowa. At an early age, he moved with his family to Garner. Following graduation from Garner High School and his service in the U.S. Navy, Jim married Darlene Evelyn Bachman in Garner in 1951. Jim worked for the U.S. Postal Service and retired as the Garner Postmaster in 1992 after 42 years of government service. He and Darlene retired to Mesa, Arizona.

Jim was a writer, poet, and family historian using the pen name “Diamond Jim”. During his life Jim was very active in volunteer organizations including the Junior Chamber of Commerce, Lions Club, Garner Country Club, Knights of Columbus, St. Vincent DePaul, Baywood Banner Hospital, WW II Memorial in Fountain of the Sun, and bringing “The Greiman Ditching Machine” to the forefront of Garner’s history. Jim was proud to participate in the WW II Honor Flight that took the veterans to Washington D.C. and the historical war monuments.

Jim was preceded in death by his parents; brothers, Russell, Lester, Donald and Kenneth Reinig; and sister, Darlene Brackey.
To send flowers to the family in memory of James "Jim" Reinig, please visit our flower store.