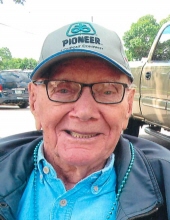 Memorial Services will be held at 10:30 A.M., Saturday, September 8, 2018 at the Fertile Lutheran Church with the Pastor Dave Halvorsen officiating.

Burial of cremains will be held in Brush Point Cemetery in rural Fertile.

Memorials may be made in the choice of the donor.

Jim was born February 13, 1919, the son of Henry and Ida (Hanson) Lovick, in Mount Valley Township. He married Alvera Hanna on May 25, 1941, at North Prairie Lutheran Church, Scarville. She preceded him in death on September 29, 2014.

Jim attended country school and worked out as a hired boy before graduating from Forest City High School in 1936. Jim and Alvera rented a farm northwest of Forest City before purchasing the “home place” in 1945, where they farmed until moving to Fertile in 1988. Jim reminisced that he had his dream job – farming with his Dad and brothers. After retiring, he continued working as a hired man for his brother Larry, mowed his lawn with a John Deere tractor, and had morning coffee at the Downtown Café liars table. Jim had served as a Sunday School teacher, Church Council, Creamery Board, Rural Electric Board, Fertile Seniors Board, Fertile celebration committees.