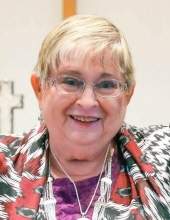 Interment will be held in Madison Township Cemetery in Forest City.

Memorials may be directed to the Janet M. Nieman memorial fund in care of the family.

Janet M. Nieman was born January 9, 1940 in rural Forest City, Iowa the daughter of Leslie “Jack” and Helen (Philpott) O’Rourke. She graduated from Forest City High school in 1958. She was married to George Nieman on January 14, 1960 and together had four children.

She was a devoted farmers wife, homemaker, and 4-H Leader. She also worked in various stores around Forest City.

Janet loved being with family and friends, singing, being a part of bible studies, prayer groups, and attending church services. She also enjoyed reading books and playing games. Janet was known for her apple pies, having won 1st place at a local pie contest. She will be dearly missed by all who knew and loved her.

She was preceded in death by her parents and husband, George in 1997.
To order memorial trees or send flowers to the family in memory of Janet Marie Nieman, please visit our flower store.