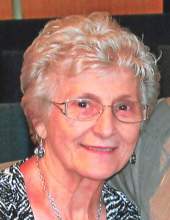 Funeral services will be held 10:30 a.m., Monday, March 28, 2022, at First Congregational Church in Buffalo Center with Pastor Tim Diehl officiating. The service will be livestreamed on the Cataldo Funeral Home Facebook page. Burial will be at Olena Mound Cemetery in Buffalo Center.

Visitation will be held one hour prior to the service at the church on Monday.

Memorials may be directed to First Congregational Church or the Good Samaritan Society.

Janice Elaine Missman, the daughter of Benjamin and Frances (Lubben) Aukes, was born February 3, 1938, on a farm south of Woden. She attended the rural schools of Bingham Township, Hancock County and graduated from Woden High School in 1955. Jan continued her education at Hamilton Business College in Mason City. On November 15, 1957, she was married to Roger Missman at First Congregational Church in Buffalo Center. They lived in New Jersey for three years while Roger served his country in the U.S. Air Force. Upon his honorable discharge, they returned to Iowa and farmed southwest of Thompson until their retirement in 2002. Besides assisting on the farm, Jan also taught cooking out of her home and operated Designer Sweats by Jan for many years. In 2011, Jan and Roger moved to Buffalo Center and in 2017 she became a resident of Good Samaritan Society in Forest City. During their retirement, Jan and Roger wintered in Arizona for several years.

She was an active member of First Congregational Church, Ladies Aid, served as organist for over 50 years and taught both Sunday and Bible school. Jan belonged to the American Guild of Organists North Iowa Chapter for many years.

She was preceded in death by her parents; husband, Roger, January 25, 2018; a sister, Marilyn Stohr; and three brothers-in-law.

To send flowers to the family in memory of Janice E. Missman, please visit our flower store.