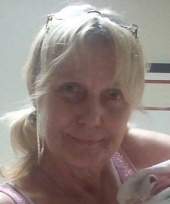 Funeral services will be held 11:00 a.m., Friday, October 18th at the United Presbyterian Church in Garner with Pastor Justin Asche officiating. Burial will be in Glenwood Cemetery in Goldfield with a flag presentation by the Goldfield American Legion.

Janine Louise Humphrey, the daughter of Randall and Shirley (Peterson) Overbaugh, was born December 23, 1958 in Big Bear, California. She graduated from Eagle Grove High School and served two years in the U.S. Army. Upon her honorable discharge, she returned to the north Iowa area where she worked in various jobs. On October 29, 1977, she was married to Donnell Humphrey in Eagle Grove. They lived on a farm north of Goldfield where they raised their two children. In 2001, Janine moved to Ft. Dodge. She enjoyed her family, hunting, fishing and sewing.

She was preceded in death by her parents.
To order memorial trees or send flowers to the family in memory of Janine Louise Humphrey, please visit our flower store.