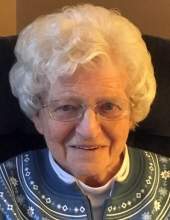 Visitation will be held one hour prior to services at the funeral chapel on Wednesday.

Memorials may be directed to Immanuel Reformed United Church of Christ in Klemme.

Jean Helen Ostendorf, the daughter of Hauko and Grace (Lieuwen) Barkema, was born April 23, 1927 on a farm near Goodell. She attended the rural schools of Hancock County and Belmond Community Schools. On December 27, 1947 she was married to Arnett Ostendorf at the United Methodist Church in Belmond. They lived in Klemme where they raised their family. Jean was employed at Par Products in Klemme as a fabric cutter for fifteen years. She enjoyed sewing, gardening and golfing at Slippery Elm Golf Course in Klemme.

She was a member of Immanuel Reformed United Church of Christ in Klemme.

She was preceded in death by her parents; husband, Arnett in 2002; infant son, Todd in 1965; daughter-in-law, Toni Ostendorf; a sister, Marvel Stadtlander; and brothers, Leland “Bud”, Ted, Harvey, Leo, and Mervin Barkema.
To order memorial trees or send flowers to the family in memory of Jean H. Ostendorf, please visit our flower store.