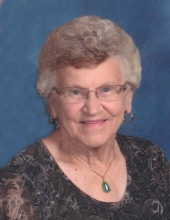 Visitation will be held from 5:00 to 7:00 p.m. on Thursday, June 6, 2019 at the Cataldo Schott Funeral Chapel, 505 North Clark St, Forest City, Iowa and also one hour prior to service at the church on Friday. Burial will be held at Crystal Township Cemetery.

Memorials may be made to Hospice of North Iowa or the Crystal Lake Senior Citizen Center.

Jean was born July 29, 1935 to Rhiner and Edith (Hilbrand) Hartman in Allison, Iowa. She graduated from Crystal Lake High School in 1952 at the age of 16. It was in high school where Jean met the love of her life. She was united in marriage to Virgil Helm on August 3, 1953. They celebrated 65 years of marriage last August.

In 1955 after Virgil completed his service in the U.S. Army, they began farming west of Forest City. After nine years, they moved less than a mile when they purchased their first farm. This became their life-long profession. Jean worked alongside Virgil her entire life. They loved to farm and in the early years raised livestock. They raised their four children on the farm.

While still farming, Jean and Virgil saw the country while delivering motor homes for Winnebago Industries for nine years. They continued to farm in the spring, summer and fall, but wintered in Mission, Texas. They continued to go south for a total of 38 winters.

Jean is survived by her husband of over 65 years, Virgil. She is also survived by four children, Julie (Dan) Gfrerer of Stillwater, Minnesota, Jody Wright of Newton, Iowa, Stephen (Nancy) Helm of Forest City and Dana Grosklags of Grimes, Iowa.