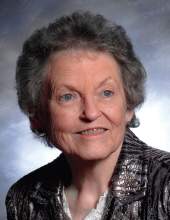 Funeral services will be held 10:30 A.M., Monday, October 13th at the United Methodist Church in Britt with Rev. Robert Dodge officiating. Music will be provided by organist, Tammy Johnson, who will accompany soloist, Darcy Eisenman and congregational hymns. Ushers will be Dennis Zuehl and Harold Wallen. Casket bearers will be Ron Adams, Arlan Thorson, Johnny Hitchings, David Beech, Steve Rogers and Dennis Brumm. Burial will be in Evergreen Cemetery in Britt.

Visitation will be held from 4 to 7 P.M., Sunday at the Cataldo Funeral Home in Britt and will continue one hour prior to services at the church.
.
Memorials may be directed to Hospice of North Iowa or United Methodist Church in Britt.

Jean Swisher, the daughter of Carl and Josephine (Chinn) Sipling, was born November 22, 1933 in Des Moines. She grew up in rural Marshalltown where she attended country school. Jean graduated from Le Grand High School in 1951 as class valedictorian. She continued her education at AIB in Des Moines. Following graduation she worked at Marquette Cement in Des Moines. On October 2, 1954 she was married to Fred Swisher. They lived in Hampton for a short while before moving to Britt in 1956. Jean worked at Britt Tech and later as church secretary at the United Methodist Church until her retirement. She enjoyed reading, sewing, ceramics, gardening and colleting carousel.

She was a member of United Methodist Church, UWM and sang in the church choir. She also belonged to the 3-G Homemakers Club, Eastern Star and PEO.

She was preceded in death by her parents; husband, Fred; grandsons, Robbie and J.T.; and numerous aunts, uncles and cousins.
To order memorial trees or send flowers to the family in memory of Jean Swisher, please visit our flower store.