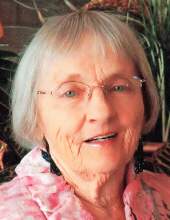 Jeannine Lorraine Chambers, the daughter of Werner and Mildred (Rice) Mathyer, was born August 17, 1936, in Dayton, Ohio. She graduated from Dayton Public High School and enlisted in the U.S. Air Force. She was stationed at Offutt Air Force Base in Omaha, NE where she met her future husband, Lloyd Chambers. On November 30, 1957, they were married at the Little Brown Church in Nashua. Lloyd and Jeannine lived in Newton, Iowa where they raised their family. Jeannine worked at the Maytag Blue Cheese Factory and at River View Release Center in Newton as a correctional officer until her retirement. After Lloyd passed away in 2010, she moved to Garner to be closer to family. In 2017, she moved to Friendship Haven in Fort Dodge. Jeannine enjoyed traveling with Lloyd in their RV, gardening and using her artistic talents creating stained glass artwork, sculptures and painting.

She was a member of the Congregational United Church of Christ in Newton.

She was preceded in death by her parents; husband, Lloyd; and brother-in-law, Jim Deyo.

To order memorial trees or send flowers to the family in memory of Jeannine L. Chambers, please visit our flower store.