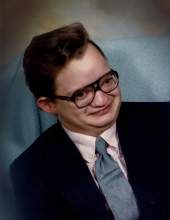 In lieu of flowers, the family wishes gifts to be given to the Hospice of North Iowa.

Jeffrey Scott Lund was born August 13, 1967 at Naeve hospital in Albert Lea, Minnesota. He was baptized at the hospital shortly thereafter, as it was not certain he would live much longer. From there he was transported to Iowa City Children’s hospital, where he spent 6 weeks. Jeff was later transferred to another hospital where he was diagnosed with cri du chat syndrome, a condition that would shape the rest of his life. Jeff’s original life expectancy was 1 year at best, and once he surpassed that mark, the doctors said if he made it to become a teenager, it would be a miracle. Jeff truly was a miracle and touched many lives throughout his life.

Jeffrey lived at home for the first 5 years of his life, until a blessing named WEE ARC was started in his home town of Forest City by Wanda Schnebly and other parents of special needs kids. He would be picked up in the mornings and spend the day with clients similar to him and people who would help him receive the care he needed. WEE ARC evolved into North Central Human Services, Krysilis and eventually Mosaic, as it is known today. Our family cannot express enough our appreciation to this wonderful organization for the care it provided Jeff throughout the 51 years of his life.

He was known as Jeffy for a good part of his childhood as he was always childlike. Jeff was a favorite of his caretakers over the years, simply because he was so lovable. He loved his family, and always lit up whenever someone was able to visit him. He enjoyed watching NASCAR races and football on TV, Mom’s home cooking and a good piece of Dad’s banana cream pie with a glass of milk. He was able to go on special trips when the opportunity arose; going for a ride in a race car one day, which thrilled him to the bone, and getting to see his Hawkeyes practice football.

Jeff is survived by his mother, Judy Gambell, his father, Jim (Mary) Lund; brothers, Mike (Diane) Lund and Gary Lund; half-brother, Nathan (Cassie) Gambell; step-sister, Jessica (Jon) Cahoon and step-brothe,r Mike (April) Gambell. Also surviving him are his nieces and nephews, Jayden, Nicholas, Chase, Faith, Jacob, Matthew and Hunter, along with many aunts, uncles and cousins. He was preceded in death by his step-father, Art Gambell; uncle David Gambell and his grandparents.
To send flowers to the family in memory of Jeffrey S. Lund, please visit our flower store.