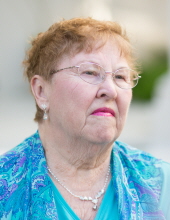 Funeral services will be held 10:30 A.M., Saturday, July 25 at the Britt Christian Reformed Church with Pastor Joel De Boer officiating. Burial will be in Evergreen Cemetery.

Jennie Mae Smith, the daughter of Hemmo and Nellie May (Kearney) Gremmer, was born February 8, 1939 at the rural Crystal Lake home of her parents. Her education years were spent in country school in Hutchins and continued on in Britt. She was a member of the class of 1957 which was the first class to graduate from the Britt High School. She furthered her education by attending AIB College in Des Moines. Jennie worked for a period of time in Mason City after graduating from AIB. On November 8, 1958 she was united in marriage to Gerald Robert Smith at the United Methodist Church in Britt. In March of 1959, they purchased a farm west of Britt where she resided until her passing.

Jennie enjoyed being able to help with the field work after Jerry passed away on February 9, 2004. She shared stories of seeing the foxes and other animals that made their homes in the fields along with her grain hauling trips to the elevator. Jennie enjoyed being able to take photos, craft projects and flowers from her garden to the Hancock County Fair and also to the Clay County Fair. It was a joy for her to receive several Grand Champion Ribbons at both fairs. She was proud to attend many of the grandchildren’s sporting events from dance recitals to football, basketball, softball and baseball. Jennie became part of the cheering section at these events.

She was a member of many different organizations from the 3-G’s Homemakers Club, the Ladies VFW Auxiliary Post #4370, a lifetime member of the Britt United Methodist Church, and also of the TOPS #IA 393, Britt. She joined the TOPS organization on January 5, 1970, held several offices in the local chapter and served in the TOPS field staff as area captain and later became a coordinator for the north half of Iowa which, after 29 field staff years, she retired from on December 31, 2014. She made many friends and cared deeply for all the chapters she served over the years and across the north Iowa area.

“Mom enjoyed spending time with her family and friends and treasures all the memories she had in her travels with all the variety of clubs she was involved in.” For her family, she leaves a legacy of talents of her gardening, canning Grandma Smith’s tomato soup, crafts, putting jigsaw puzzles together and winning a number of cribbage and hand and foot card games that were played during holidays. Solitaire was always a favorite during those blizzards in the 1970’s. She also enjoyed decorating the house during the holidays. She loved and shared with us all many inspirational and motivational readings.

Her memories will continue on through her three children, Vicki (Steve) Schreiner-Kaiser of Hutchinson, MN, Bonnie (Mark) Melohn of Kanawha and Tracy (Michelle) Smith of Britt; grandchildren, Kevin (Megan) Schreiner, Jessica Schreiner (friend, Tyler), Jennifer Harriman (friend, Jerry), Bradley (Jola) Harriman, Kaitlin Smith and Glen Smith; and her first great-grandchild, Preston Schreiner who has a special part in her memories. Also left to cherish her memories of time together include, step-grandchildren, Malachi, Carissa, Melissa, and Branton Kaiser; her brother, Kenneth (Carol) Gremmer; three brothers-in-law, Jim (Doris) Smith, Harry (Pearl) Smith and Kenny (Nancy) Smith all of Britt; many aunts, uncles, and cousins all throughout the United States and in Holland; many nieces and nephews; best friends; and TOPS members from all over.

Jennie was preceded in death by her husband, Jerry Smith; her parents; a sister, Beverly Scott; Jerry’s parents, Roy and Martha Smith; a nephew, James Smith, Jr.; and a niece, Lisa Scott.
To order memorial trees or send flowers to the family in memory of Jennie M. Smith, please visit our flower store.
Send a Sympathy Card