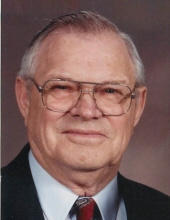 Memorial services will be held 1:30 P.M., Saturday, September 21, 2019 at Immanuel Lutheran Church in Forest City with Pastor Rod Hopp officiating. Burial of cremains will be held at a later date.

A gathering of friends and family will be held one hour prior to the services at the church on Saturday.

In lieu of flowers, memorials may be directed to Immanuel Lutheran Church.

Jerold Robert Holland was born March 31, 1926 at home in Winnebago County, the son of Kenneth and Carrie (Skilbred) Holland. He grew up on the family farm and attended school in Buffalo Center, graduating in 1946. He was married to Winifred Munson on August 26, 1949 and to this union three sons were born, John, Tom and Dean.

Jerry was a long-time farmer, he loved taking care of the land and working and spending time outdoors. Jerry was a handyman, there was nothing he couldn’t fix, he was self-starter and always self-sufficient. He enjoyed golfing, hunting, fishing, attending sporting events and playing games and cards. Family was very important to him and he enjoyed spending time with them, especially his grandchildren. He will be dearly missed by all who knew and loved him.