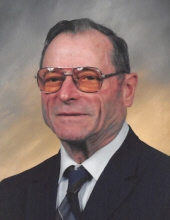 A gathering of family friends will be held from 5 to 7 P.M., Wednesday, September 23rd at the Cataldo Funeral Chapel in Garner with a Scriptural wake service at 7 P.M by Fr. Melvin Hemann. Inurnment will be at a later date in St. James Catholic Cemetery in Forest City.

In lieu of flowers memorials may be directed to the Jerome Heimer Memorial Fund.

Jerome Albert Heimer, the son of Joseph and Elizabeth (Smith) Heimer was born April 17, 1922 in Stacyville. He attended Visitation School in Stacyville. On August 27, 1952, he was united in marriage to Joan Loecher in Stacyville. Jerome was the manager of the Co-op Oil Station in Stacyville from 1952 until 1969. He then was employed at Winnebago Industries until his retirement in 1984. He enjoyed playing cards and picking up cans.
He was a member of St. Boniface Catholic Church in Garner.

He was preceded in death by his parents; oldest son, Dale; an infant son; grandson, Logan Bruns; twin infant great-grandchildren; and twelve siblings.
To order memorial trees or send flowers to the family in memory of Jerome A. Heimer, please visit our flower store.
Send a Sympathy Card