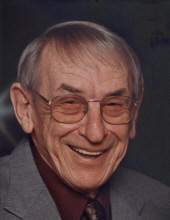 Funeral services will be held 10:30 A.M., Wednesday, September 6th at the United Methodist Church in Klemme with Pastor Wayne Bruggeman officiating and Pastor Cody Schwichtenberg delivering the message. Burial will be at Amsterdam Cemetery near Goodell with military rites by the Klemme Veterans Ceremonial Unit.

Visitation will be held from 4 to 7 P.M., Tuesday, at the Cataldo Funeral Chapel, 160 E. 4th St., in Garner and will resume one hour prior to services at the church.

Memorials may be directed to the Klemme United Methodist Church, Garner Volunteer Ambulance Service, Hospice of North Iowa or to the donor’s choice.

Jesse Donald Schwichtenberg, the son of David and Carrie (Reemtsma) Schwichtenberg, was born June 6, 1926, on a farm near Goodell. He graduated from Klemme High School in 1943 and served his country in the U.S. Marine Corps during WW II. Upon his honorable discharge, he returned to the Goodell area and farmed with his brother, John. In August of 1952, he married Marlys Berhow in Goodell. They farmed on what is now known as the Schwichtenberg Century Farm where they raised their family. Jesse also worked for Central Soya in Belmond and IMT in Garner where he retired from in 1994. On September 19, 1992, he married Daisy Schaefer Barz at the Kanawha United Church of Christ. They lived in Kanawha until moving to Garner in 2001.

He was a member of the Klemme United Methodist Church and Adam Schaefer American Legion Post No. 625 in Klemme.

He was preceded in death by his parents; first wife, Marlys in 1990; daughter, Annette; two grandsons, Daniel and Christopher Schwichtenberg; two sisters, Viola Blau and Jean Gruis; and a sister-in-law, Frances Schwichtenberg.
To send flowers to the family in memory of Jesse D. Schwichtenberg, please visit our flower store.