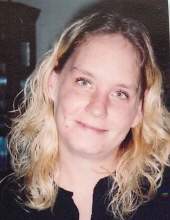 Memorial services will be held 2:00 P.M. Tuesday, February 9, 2016 at First Baptist Church in Forest City with Pastor Eric Weaver officiating. Inurnment will be at Madison Township in Forest City.

Jillian Joy Hoeft, the daughter of Michael and Darla (Fredrickson) Hoeft was born March 17, 1981 in Forest City. She attended Forest City High School. After high school, she was employed at Winnebago in Forest City for a few years. She enjoyed her cats, camping, fishing and especially, spending time with her daughter, niece and nephews.

She was preceded in death by her paternal grandparents, Dennis and Bonnie Hoeft; maternal grandfathers, Ordean Fredrickson and Bob Holland; maternal great-grandmother, Lu Thayer; and cousin, Branden Brock.
To send flowers to the family in memory of Jillian J. Hoeft, please visit our flower store.