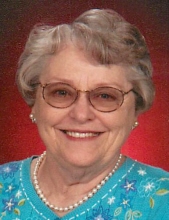 Visitation will be held from 4 to 8 P.M., Friday at St. Wenceslaus Catholic Church with a combined Catholic Daughters of the Americas and Rosary Society rosary at 4 P.M. and a Scriptural wake service at 8 P.M. Visitation will continue one hour prior to services at the church.

Joan Elaine Hrubes, the daughter of Walter and Myrtle (Geisler) Lemke, was born November 23, 1937 at Hampton. She graduated from Klemme High School in 1955. On June 28, 1955 she married the love of her life, Clarence Hrubes, at St. Wenceslaus Catholic Church in Duncan. In their fifty-eight years of marriage they were blessed with six wonderful children, nine grandchildren and nine great-grandchildren. Joan was a Girl Scout, Rainbow Girl, Cub Scout Den mother and Girl Scout leader. She and Clarence farmed south of Duncan until 1993. In September of 1997 they moved from the farm into Garner. Joys of her life included spending time with family and friends, quilting, couponing, writing to her pen pal, and making quilts for her family, Sister Carol in Colorado and the Shriner's Hospital in Minneapolis. She also enjoyed trips to casinos especially her most recent trip in January of 2013 to Las Vegas with Clarence and some of their grandchildren.

She was preceded in death by her parents; parents-in-law, J.J. and Rose Hrubes; and son, Terry, in 1979.
To order memorial trees or send flowers to the family in memory of Joan Elaine Hrubes, please visit our flower store.
Send a Sympathy Card