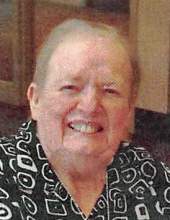 Funeral services will be held 2:00 P.M.., Saturday, July 29th at the Woden Christian Reformed Church with Rev. Greg Baum officiating. Burial will be in the church cemetery.

Visitation will be held from 5 to 7 P.M., Friday at the Cataldo Funeral Home in Woden and will resume one hour prior to services at the church.

JoAnn Mae Eden, the daughter of Harm and Aletta (Meyer) Eden, was born May 14, 1932 on a farm near Woden. She attended the rural schools of Bingham Township and Woden High School. JoAnn lived at home helping with the care of her family. Her ministry in life was taking care of others. Upon her retirement, she moved to Prairie View Apartments in Garner where she lived until becoming a resident of Westview Care Center. She enjoyed spending time with her family and listening to music.

JoAnn is survived by three brothers, Harvey (Donna) Eden of Wesley, Jim (Judy) Eden of Woden and Arnold (Nancy) Eden of Woden; a sister, Donna (Jerry) Yeo of Jenison, MI; a brother-in-law, Don Alphs of Britt; and many nieces and nephews.

She was preceded in death by her parents; sister, Irma Alphs; and a nephew, Robert Alphs.
To send flowers to the family in memory of JoAnn Eden, please visit our flower store.