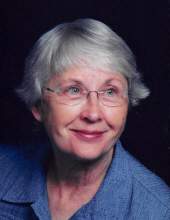 Joanne K. Olsen, 87, of Clive, formerly of Garner, died Monday, September 17, 2018 at Silvercrest of the Woodlands in Clive, Iowa.

A memorial service will be held 10:30 A.M., Monday, September 24th at the United Presbyterian Church in Garner with Rev. Justin Asche officiating. Inurnment will be at Evergreen Cemetery in Jewell, Iowa.

Memorials may be directed to the United Presbyterian Church, Hospice or to the donor’s charity of choice. Arrangements are with Cataldo Funeral Home of Garner.

Joanne K. Olsen, the daughter of Lloyd and Alice (Wolbert) Kingsbury, was born July 30, 1931 at Kimball, South Dakota. She attended school at Kimball until her sophomore year when she moved with her family to Garner. Joanne graduated from Garner High School in 1949 and continued her education at Iowa State Teacher’s College in Cedar Falls for two years. On June 24, 1951 she was married to LeRoy Olsen at the United Presbyterian Church in Garner. They lived in Garner most of their married life where they raised their five children. After LeRoy passed away in 1989, she continued to live in Garner caring for her mother. In 2000, she moved to the Des Moines area. Joanne enjoyed sewing, dancing, traveling, visiting family, working 1,000-piece puzzles and was an avid reader.

She was member of the United Presbyterian Church, UPW, PEO, Beta Sigma Phi Sorority and was active in the Lutheran Church of Hope in West Des Moines. In her younger years, she was a Girl Scout leader. She was a strong supporter of Iowa Public Radio.

She was preceded in death by her parents; husband, LeRoy; daughter, Gail Olsen Christians; sister, Doris Banks; and son-in-law, John Judd.
To send flowers to the family in memory of Joanne K. Olsen, please visit our flower store.