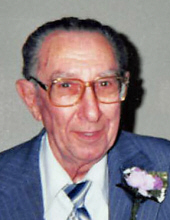 Funeral services will be held 10:30 A.M., Wednesday, June 6th at the United Methodist Church in Klemme with Pastor Wayne Bruggeman officiating. A private inurnment will be held at Concord Township Cemetery in Garner.

John August Hanson, the son of William and Rebecca (Nelson) Hanson, was born February 6, 1924 in Britt. He attended country school near Britt a half-mile from his home until he was ten. In 1934, he moved with his family to a farm four miles east of Klemme and the country school he attended was just a few yards away. In 1941, when John was 17, the family moved a farm four miles east of Garner. John helped on the family farm and one day his father sent him to help on the neighboring farm. There he met Ardella Schneider, the love of his life. They were married on March 22, 1947 at the Little Brown Church in Nashua. To this union four children were born, Janelle, Richard, Dennis and Ron. John was a truck driver all his adult life. He hauled gravel and livestock for several years. In 1952, he bought a semi-truck and leased to Murphy Transportation out of Hampton, Iowa, hauling eggs to the East coast. In October of 1965, he had a near fatal truck accident in Pennsylvania that took him three years to recover from. In 1969, he went to work for Winnebago Industries and worked there for 11 ½ years. From there he worked at Iowa Mold and Tooling in Garner and DMC in Mason City delivering trucks all over the United States. After retiring, he spent his leisure time having coffee every morning at the Klemme Elevator with the guys. He was known for his stories and many jokes. He also spent a lot of time in his shop tinkering and enjoying the many cats that seemed to find their way to either the acreage or the house. John also enjoyed listening to country music. He was a member of the United Methodist Church in Klemme.

He was preceded in death by his parents; wife, Ardella in 2016; son, Richard in 2005; brothers, Wilbur, Marvin, Arthur and Lyle; a sister, Lavonne; and an infant brother, Kenneth.
To order memorial trees or send flowers to the family in memory of John A. Hanson, please visit our flower store.
Send a Sympathy Card