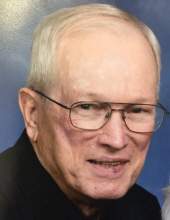 Memorial services will be held 10:30 A.M., Friday, February 10th at St. James Catholic Church with Fr. Jim Dubert and Fr. Paul Lippstock officiating. A flag presentation ceremony will be conducted by the Forest City Veterans Ceremonial Unit. Burial will be at a later date in the church cemetery.

Visitation will be held one hour prior to services at the church on Friday. Cataldo Schott Funeral Home is in charge of arrangements.

John Richard Morris, the son of Frank and Mary (Starek) Morris, was born April 29, 1932 in Washington, Pennsylvania. He graduated from Washington High School in 1949 and continued his education at Washington and Jefferson College where he graduated with a degree in physics in 1953. John served his country in the U.S. Army in Okinawa, Japan for two years. Following his honorable discharge, he returned to Pennsylvania and enrolled at Massachusetts Institute of Technology where he received a master’s degree in industrial management. On August 3, 1957, he married Connie Kotva at All Saints Catholic Church in Etna, PA. They lived in Pittsburgh, Chicago and Armonk, NY while John was employed with IBM. John and Connie then moved to Minneapolis where John was Vice President at Control Data Corporation for thirteen years. In 1986, they moved to Forest City and became the WIT directors at Winnebago until 1990. John then was appointed CFO at North Central Human Services in Forest City (now MOSAIC) where he remained until his retirement. He enjoyed reading and wood working.

He was a member of St. James Catholic Church and the Forest City Rotary Club.

He was preceded in death by his parents; and sister, Francis Emily Morris.
To send flowers to the family in memory of John R. Morris, please visit our flower store.