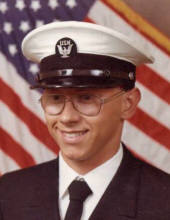 A memorial service will be held 1:30 P.M., Friday, February 23rd at the United Methodist Church in Garner with Rev. Paul Evans officiating. Military rites will be conducted by the Garner Veterans Ceremonial Unit.

John William Staley, Jr., the son of John, Sr. and Jean (Retallick) Staley, was born December 28, 1955 in Madison, Wisconsin. He graduated from Oregon High School in Wisconsin and enlisted in the U.S. Navy. John served aboard the USS Vulcan in Norfolk, VA for two years. During his time in Norfolk he met Karen King. They were married on December 6, 1976 at the Navy Fleet Chapel in Norfolk. While he was in the service, the family lived in several states including Virginia, Maine and California. Upon his honorable discharge in 1983, the family moved to Oregon, Wisconsin. They later moved to Thornton and Garner. John was employed at Sperry Unisys in Clear Lake and the maintenance department at NIACC and Waldorf College where he retired from after 22 years of employment. He enjoyed fishing, was an avid sports fan and loved watching Jeopardy and Wheel of Fortune.

He was preceded in death by his parents; and two brother, Mark Staley and Robert Staley.
To order memorial trees or send flowers to the family in memory of John W. Staley, Jr., please visit our flower store.
Send a Sympathy Card