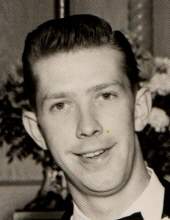 Memorial services will be held on Saturday, November 22, 2014, at 10:30 a.m. at the Forest City United Methodist Church with Rev. Charles Layton officiating. Inurnment will be held in Oakland Cemetery in Forest City.
Memorial contributions may be made to the Jay Moen memorial fund in care of the family.

Jay was born in Forest City, IA on June 9, 1935, the son of Carl and Stella (Helgeland) Moen. He graduated from Forest City HS in 1953 and attended Waldorf College. He also served in the US Army during the Korean War. Living in the twin cities he enjoyed being a lumber salesman and machinist. He enjoyed his family and friends and the times he spent with them. He will be missed by all who knew and loved him.

He was preceded in death by his parents; brothers, Gene and Bruce Moen and niece, Jeanne Moen.
To send flowers to the family in memory of Joyce "Jay" C. Moen, please visit our flower store.