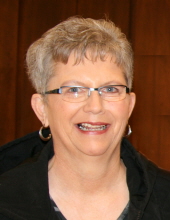 GARNER – Judy A. Nedved, 66, of Garner passed away on Sunday, November 2, 2014 at the Hancock County
Memorial Hospital in Britt.

A memorial visitation will be held from 4 to 7 P.M., Tuesday at St. Boniface Catholic Church with a rosary at 4 P.M. Visitation will continue one hour prior to services at the church. Cataldo Funeral Home in Garner is in charge of arrangements.

Memorials may be directed to St. Boniface Catholic Church or Hospice of North Iowa.

Judy Ann Nedved, the daughter of Clifford and Deloris (Paul) Nelson, was born January 18, 1948 in Rush City, MN. She attended school at North Branch, MN where she graduated from high school in 1966. After high school, she moved to California where she met her first husband. To this union three daughters were born. The family lived in Cloquet, MN before moving to Garner in 1976. On March 26, 1982 she was married to Jerry Nedved at Prior Lake, MN. They lived in Garner all of their married life. Judy was employed at Sperry Univac in Clear Lake, Farm Bureau in Garner and from 1993 to 2010 with her husband, Jerry, in their accounting business in Garner. Judy enjoyed watching her grandchildren’s activities, golfing, bowling and playing bridge.

She was a member of St. Boniface Catholic Church where she was an organist for many years. Judy also was a member and past officer of the Garner Women’s Golf Association.

She was preceded in death by her parents; and an infant son, Brian.
To order memorial trees or send flowers to the family in memory of Judy A. Nedved, please visit our flower store.
Send a Sympathy Card